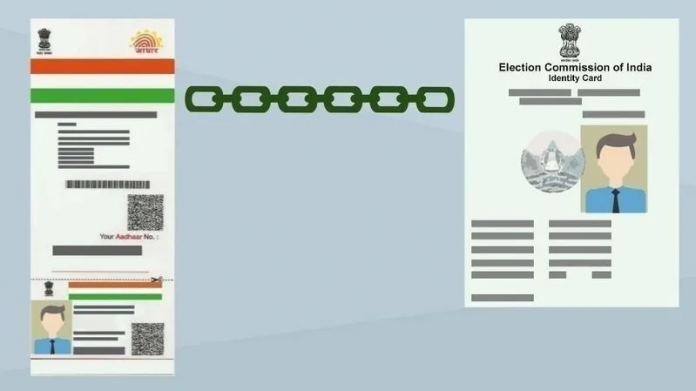 A new form has come to add Aadhaar numbers to the voter list. Anyone whose name is on the voter list will be able to add an Aadhaar number till April 1, 2023. There will also be an option to share an MGNREGA card, health insurance card, driving license, and PAN card.

The government has changed the voter registration laws to allow Aadhaar numbers to be linked to voter lists. Duplicate entries will be eliminated, and the election legislation for ‘Service Voters’ will be gender neutralized as a result. ‘Service Voters’ are soldiers stationed in remote places or members of Indian missions abroad.

Existing voters can now share their Aadhaar numbers by filling out a new Form-6B. The Legislative Department of the Union Law Ministry issued a notification on Friday night saying that the rules have been amended in accordance with the provisions of the Election Parliament passed the Laws (Amendment) Act in December of last year. From August 1, 2022, the Electoral Registration (Amendment) Rules will take effect.

Read More: No one is abusing your Aadhar card; you may check this in 2 minutes from the comfort of your own home.

According to the notification, anyone whose name appears on the voter list will be eligible to add his Aadhaar number on or before April 1, 2023. Those who do not have an Aadhaar card would be able to share other evidence such as an MGNREGA card, a health insurance smart card given under the labor ministry’s scheme, a driver’s license, or a PAN card.

Now a citizen who has completed 18 years of age on 1st January or 1st April or 1st July or 1st October of any year can apply for registration as Tatkal Voter. In order to make the election law gender-neutral, the word ‘wife’ has been removed and the word ‘spouse’ has been included. This will enable the wife or husband of the ‘Service Voter’ to vote.

Share
Facebook
Twitter
Pinterest
WhatsApp
Linkedin
Telegram
Previous articleTravel Tips 2022: If you are planning to roam in the mountains, then these safety tips will come in handy
Next articleHina Khan: After sharing photos of herself on the beach in a monocony and showcasing her daring fashion sense, people responded as follows.