These contestants of Bigg Boss OTT are very bold, some went backless and some took off the top 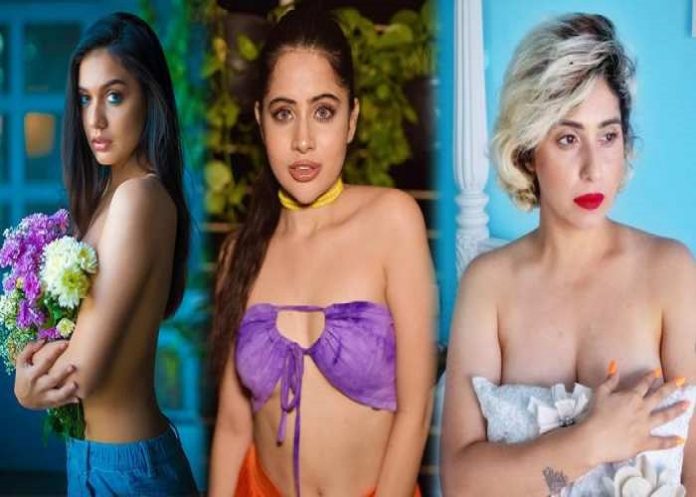 Bigg Boss OTT: The season of Bigg Boss has started again. This time it is a big fan of the show on the OTT platform. The reality show will air on the digital platform for six weeks. It will be hosted by director-producer Karan Johar. This time seven female contestants are seen in the show. All of them are very bold and five of them are very bold. Somebody has got a backless photoshoot done and someone has done topless. Let’s see the complete list of these contestants.

Divya Agarwal has also appeared in reality shows before. She has previously been a part of reality shows like ‘Splitsvilla’, ‘Ace of Space’ and ‘Roadies’. Divya is an amazing dancer. Divya Agarwal is quite bold and carefree. After her break-up with Splitsvilla partner Priyank Sharma, Divya is dating Khatron Ke Khiladi 11’s, Varun Sood. He had a breakup with Priyank in ‘Bigg Boss’ itself. Divya is very active on social media. Divya Aggarwal came into the limelight due to her bold look and topless photoshoot.

Shamita Shetty also came to Bollywood as a bold actress. He did many bold roles. Many times the actress has done bikini shoots. The actress has been away from the film screen for a long time. She has entered Bigg Boss OTT as a contestant. Shamita has been a part of reality shows like ‘Jhalak Dikhhla Jaa’ and ‘Khatron Ke Khiladi’.

Neha Bhasin needs no introduction. Neha is a popular Bollywood singer and she is known for starting the women’s band Culture. He is very bold in real life. He also did a topless photoshoot. Also, she was seen in bold style in her song. He has sung many special songs in Bollywood, such as ‘Dil Diya Gallan’, ‘Chashni Reprise’ and ‘Jag Ghumanya’. Many of his recent songs are also very popular, such as ‘Nai Jaana’, ‘Madhaniya’, ‘Akh Kashni’, ‘Bajre Da Sitta’, and ‘Lung Gavacha’. Neha had also accused Anu Malik during the #MeToo movement, after which his name was associated with controversies.

Ridhima Pandit rose to fame with the show ‘Bahu Hamari Rajni Kant’. He played the role of a super humanoid robot and won the hearts of the audience. However, before getting into acting, the 31-year-old actress modeled in television commercials for several high-end labels. After her show went off-air, Ridhima was eaten in the comedy show ‘The Drama Company. She was also seen in the reality show ‘Khatron Ke Khiladi’ season 9 and emerged as the second runner-up of the show. Ridhima is also very bold and she did a photoshoot in a backless dress.

Urfi Javed is quite bold and often keeps posting her bold pictures. Fans like this avatar of him. Born in Lucknow, Uttar Pradesh, 25-year-old Urfi Javed has 1.4 million followers on social media. The young actress made her television debut at the age of 20 with ‘Bade Bhaiya Ki Dulhania’ as Avni Pant. The actress has done shows like ‘Yeh Rishta Kya Kehlata Hai’, ‘Kasauti Zindagi Ki’ and ‘Ae Mere Humsafar’. Urfi is known for her roles in serials ‘Bepnaah’ and ‘Kasauti Zindagi Ki’.

Share
Facebook
Twitter
Pinterest
WhatsApp
Linkedin
Telegram
Previous articlePPF: If you save only Rs 34 every day, you will get Rs 26 lakh, know how to invest
Next articleRubina Dilaik flaunts wearing a bikini, then flashes her beauty in the pool

Nora Fatehi Troll: Nora Fatehi’s top was cut like this! People were angry after watching the VIDEO

Nora Fatehi Troll: Nora Fatehi has been seen at the airport today in such a way that now this video is covered on social...
Read more

Makers can shorten BB15. The show was to end in February. But given the low TRP and buzz, Bigg Boss 15 can be off...
Read more

This actress got down in the water wearing a mesh dress, Fans Love Short Skirt Look

The latest pictures of Bigg Boss fame actress Rashmi Desai are setting the internet on fire. Rashmi Desai is in the Maldives these days...
Read more

Rubina Dilaik flaunts wearing a bikini, then flashes her beauty in the pool