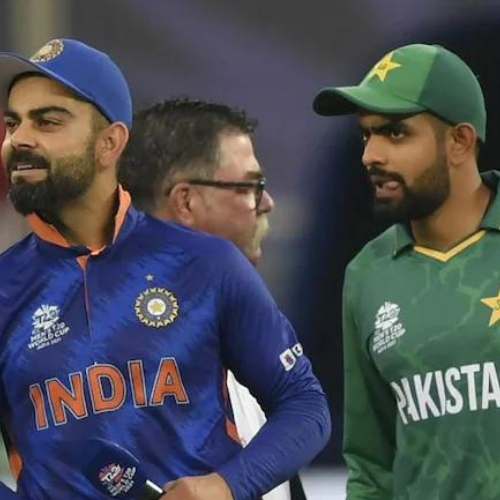 The schedule for the upcoming ICC Men’s T20 World Cup 2022 has been announced, India will go on head to head with Pakistan at the iconic Melbourne Cricket Ground on October 23. With two Asian teams at the MCG, it will be the first World Cup match.

Defending Champions will take last year’s final opponent New Zealand to defend their T20 World Cup title on Oct. 22 in Sydney. For the first time, the tournament will be hosted in Australia which begins on Oct. 16 and runs until Nov. 13.

Sri Lanka will take on Namibia on October 16 in Round 1 to start the tournament in Geelong and there will be two qualifiers for the teams in their Group A. West Indies will also start with Scotland also start in this round of Group B and later on joined by two qualifiers as well.

Host Australia has been placed alongside 2021 runners-up New Zealand, England, Afghanistan in Group 1 in the Super 12 stage. After that, they will be joined by the winner from Group A and runners-up of Group B.

In Group 2, India, Pakistan, Bangladesh, and South Africa will be joined by the winner of Group B and runners-up of Group A.

India will take on Group A runner-up on October 27 at the SCG after their match with Pakistan at the Melbourne Cricket Ground and then take on South Africa in Perth followed by Bangladesh on November 2 and then Group B winner on November 6 at the MCG.

SCG and Adelaide Oval will be the host of the semi-finals on November 9 and 10.

According to ICC CEO Geoff Allardice, the tournament will play a huge role in encouraging the next generation of players and fans.

“T20 is the global growth format for cricket and the ICC T20 World Cup 2022 will play a huge role in inspiring our next generation of players and fans and showcase the very best of our sport,” Allardice said in a media release.

“We know that hundreds of thousands of passionate cricket fans will turn out to support every single one of the 16 teams across all seven of our host cities. You only need to cast your mind back to the glowing ICC Women’s T20 World Cup 2020 in Australia to know that this is going to be a great event for players and fans alike,” he added…

Today, it's simple to watch matches on a mobile device, but you must first sign up for a membership plan. However, today we'll share...
Read more

Will Team India go to Pakistan after 19 years? ICC again issued this statement

ICC has given the hosting of the 2025 Champions Trophy to Pakistan. All the teams were in a state of confusion about going to...
Read more

The pitches in UAE help the spinners and are excellent for batting. If India wants to win the T20 World Cup, then it needs...
Read more

The secret of why Dhoni was made the mentor of Team India for the T20 World Cup, has now been revealed by the BCCI....
Read more