RR vs GT Final IPL 2022: In the final, the batsmen drowned the loot of Rajasthan, the team collapsed like leaves 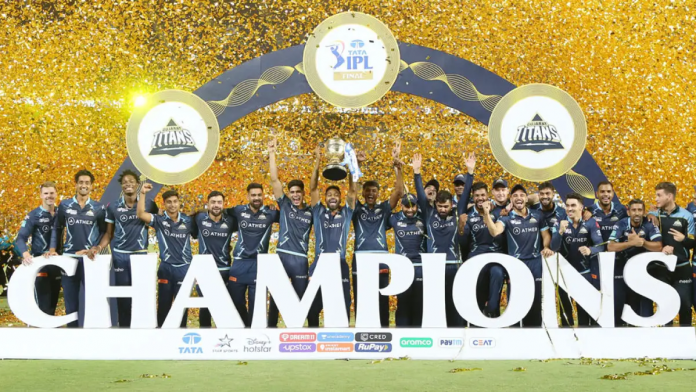 This was the second-lowest score for the team batting first in an IPL final match. Number one, in this case, is the Mumbai Indians, who scored 129 for 8 in the final of the year 2017.

In the final match of IPL 2022, Gujarat Titans won the title by defeating Rajasthan Royals (RR) by seven wickets. In this match, Rajasthan captain Sanju Samson had won the toss and decided to bat first, but his decision was not found by the fanatics of the team and he could score only 130 runs in 20 overs. The team had to bear the brunt of this poor batting.

Rajasthan Royals got off to a good start as they scored 31 runs in 3.5 overs for no loss. But after the dismissal of Yashasvi Jaiswal and then Sanju Samson in the 9th over, the Rajasthan Royals’ innings faltered. Soon Rajasthan’s score became 112 for seven for 60 runs from one wicket.

That is, Rajasthan lost 6 wickets within 53 runs. During this, apart from Samson, Jos Buttler (39 runs), Devdutt Padikkal, Shimron Hetmyer, Ravichandran Ashwin and Trent Boult lost their wickets. Later in the last over of the innings, two more wickets fell for Rajasthan in the form of Obed McCoy and Riyan Parag.

This was the second-lowest score for the team batting first in an IPL final match. In this case, the team of Mumbai Indians is at number one, which scored 129 runs for 8 wickets in the final of the year 2017. The special thing is that out of the top-5 lowest scores, the team batted first on four occasions. was victorious.

Share
Facebook
Twitter
Pinterest
WhatsApp
Linkedin
Telegram
Previous articleRakul Preet Singh Photos: Rakul Preet Singh wore a deep neck blouse with a sari, it would be difficult to lose sight of the pictures
Next articleShani Jayanti 2022: Wonderful coincidence after 30 years on Shani Jayanti, do these 5 things before sunset today