IND vs SA: Captain Rishabh Pant was not happy after winning the match, praised these players fiercely 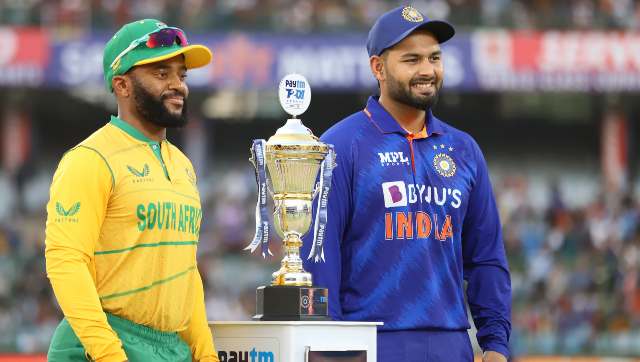 India vs South Africa: Indian team won against South Africa in a bang style. After the match, captain Rishabh Pant explained the reason for the victory and praised many players.

India vs South Africa: In the third T20 match, the Indian team defeated South Africa by 48 runs. Team India’s bowlers and batsmen showed an amazing game in this match. Captain Rishabh Pant looked very happy after the match. He praised many players fiercely.

Indian captain Rishabh Pant said, ‘Both the batsman and the bowler performed well. We thought we were 15 runs behind but didn’t think much about it. The bowlers did their job well. In India, the role of spinners in the middle overs is important, so there is pressure on them. In such matches, playing without pressure gives such a result. Speaking further, Pant said that the bowlers bowled very well. Yuzvendra Chahal took three and Harshal Patel took four wickets in the match.

Said this thing for the batsmen

Captain Rishabh Pant said about the faltering middle order after a good start, ‘It is not a good thing, but after a good start, it becomes difficult to play fast as soon as the new batsman comes. We will try to improve it in the next match. Pant further said that we should have scored 15 more runs while batting.

The opening pair did wonder

Ishan Kishan and Ruturaj Gaikwad laid the foundation of India’s victory with a partnership of 97 runs for the first wicket. Both made stormy half-centuries in the match. Thanks to him, the Indian team could only score 179 runs. Ishan Kishan scored 54 and Rituraj Gaikwad scored 57 runs. At the same time, the Indian bowlers were able to maintain their grip on the match from the beginning and kept taking wickets at regular intervals.

India got its first win

The Indian team defeated South Africa for the first time in the series. The Indian team won the third T20 match by 48 runs. Bowlers and batsmen showed a great game for India. On the basis of the innings of Ishan Kishan and Rituraj Gaikwad, India gave a target of 180 runs to South Africa, which South Africa could not achieve and the entire team was all out for 131 runs.