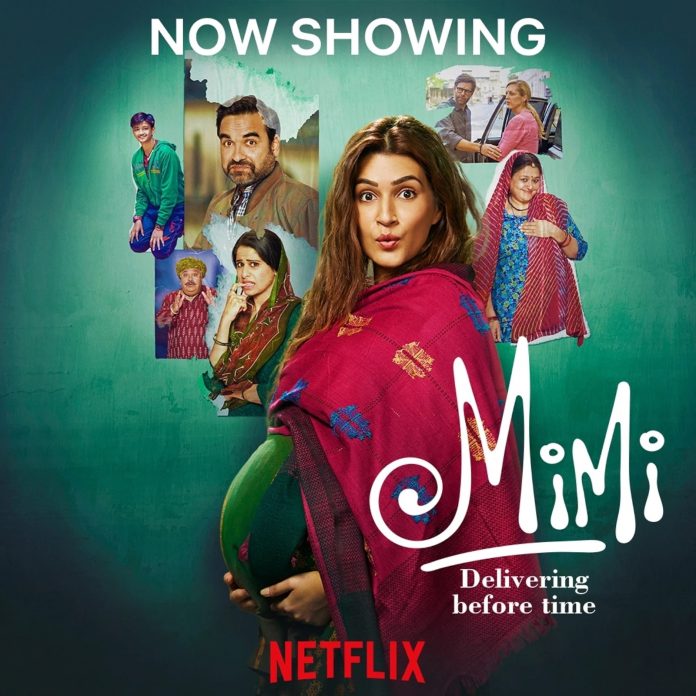 AR Rahman’s songs have filled the magic in Mimi. The songs Param Sundari and Rihai De have enhanced Mimi’s character and her emotions. While the song Param Sundari gives glimpses of Mimi’s dream, the released song reveals Mimi’s sentimentality.

The trailer of Kriti Sanon and Pankaj Tripathi’s film Mimi filled the excitement for the film. It was felt that there would be a good combination of both emotion and comedy. Four days ahead of time, the makers of Mimi ended this excitement of the audience, but whether the story of the film could meet the expectations of the audience, read the review for it.

Director Laxman Utekar has chosen a serious and taboo topic like surrogacy for this film. Mimi (Kriti Sanon) is a dancer and she dreams of going to Bollywood, but she does not have that much money. On the other hand, an American couple is searching for a surrogate mother. The American couple meets Bhanu (Pankaj Tripathi) who introduces them to Mimi. Bhanu explains the whole process to Mimi and tells that she will get 20 lakh rupees in return.

Mimi agrees to become a surrogate mother to fulfill her dream of going to Bollywood. But how will she take care of the child in the womb for nine months without informing the family members? Here Shama (Sai ​​ Tamhankar) accompanies him. Shama and Bhanu support Mimi at every turn of her pregnancy. Suddenly one day the doctor tells that the child in Mimi’s womb is suffering from Down syndrome. Hearing this, the American couple refuses to take the child.

When Mimi comes to know about this, the ground slips under her feet. Boukhalai Mimi goes back to her home where her mother (Supriya Pathak) and father (Manoj Pahwa) are shocked to find Mimi pregnant. Well, the family adopts her and then gives her full support till Mimi gives birth. Later, the American couple comes back to pick up the child but will have to watch the film to find out whether Mimi will give them her child.

Read More: Indian Railways: The Indian Railways Catering and Tourism Corporation (IRCTC) has implemented new restrictions for online ticketing; otherwise, you will be unable to book

On the ground, becoming a surrogate mother is not an easy decision for any girl, but Mimi readily agrees to this. Her pregnancy phase, society’s opposition, mother’s association with the child, have all been hastily crossed without showing her emotions. It was felt at many places in the film that the tune of comedy was being played unnecessarily. Although Pankaj Tripathi’s comic timing has been perfect. But still, there was an attempt at comedy in a sensitive and emotional scene of the film. Or rather, director Laxman Utekar made the emotion disappear from Mimi due to his easy and simple direction.

Kriti Sanon’s work cannot be doubted. Kriti has done a great job in her character. Everyone is aware of Pankaj Tripathi’s style. Intense or comic scenes, Pankaj kept his grip on every scene and won hearts. Sai Tamhankar has done a commendable job in the film. His presence became the plus point of the film. At the same time, the acting of Manoj Pahwa and Supriya Pathak will also have to be praised. However, Supriya’s acting was heavily overshadowed by other supporting characters.

AR Rahman’s songs have filled the magic in Mimi. The songs Param Sundari and Rihai De have enhanced Mimi’s character and her emotions. While the song Param Sundari gives glimpses of Mimi’s dream, the released song reveals Mimi’s sentimentality. AR Rahman’s songs did the work that the scenes of the film did not do.

The work got spoiled due to haste

Overall, the curiosity for Mimi was not felt after watching the trailer. Mimi’s story definitely gives a message on surrogacy, but it probably could have been molded better on screen. There was a lack of seriousness of the subject in the film. As it was said about Mimi that it is a comedy-drama, then seeing the film, it seems that it was not an emotional drama in which both the works were spoiled in a hurry.

Share
Facebook
Twitter
Pinterest
WhatsApp
Linkedin
Telegram
Previous articleAadhaar Card New Rule: The rules for creating Aadhaar have been changed, and UIDAI has provided information; this will have a direct influence on you
Next articleThese WhatsApp settings can be risky; if you don’t update them right away, you’ll lose your data