Not only Jacqueline-Nora, Sara and Jhanvi were also in the list of thugs Sukesh Chandrashekhar, were given expensive gifts 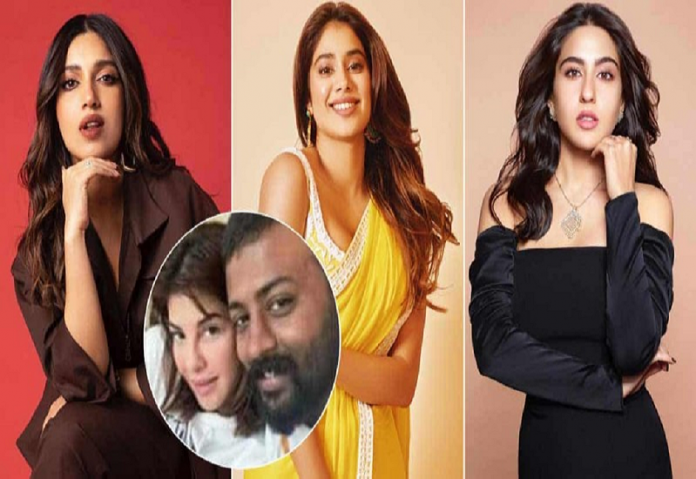 There have been new revelations related to Sukesh Chandrashekhar, accused of cheating of 200 crores. It is learned that Sara Ali Khan was also Sukesh’s target. Enforcement Directorate investigation has revealed that Sukesh Chandrashekhar, Jacqueline Fernandez, Nora Fatehi as well as three other actresses were on their target. The names of Sara Ali Khan, Jhanvi Kapoor, and Bhumi Pednekar have surfaced in this.

Sara Ali Khan
Sukesh has named Sara Ali Khan, Jhanvi Kapoor, and Bhumi Pednekar. In May 2021, Sara Ali Khan was targeted by Sukesh. Sukes had WhatsApp messaged Sara Ali Khan on May 21. He introduced himself to Sara as Suraj Reddy. In these messages, Sukesh told Sara that he wanted to gift her a car as a family. She also said that her CEO Mrs. Irani tried to contact her several times, but she could not succeed. Mrs. Irani is a colleague of Sukesh Chandrashekhar, who used to persuade the actresses to have a conversation with Sukesh. It was Pinky Irani who introduced Jacqueline Fernandez to Sukesh.

Suraj Reddy aka Sukesh kept messaging Sara Ali Khan. He also kept giving them expensive gifts. The ED has questioned Sara Ali Kan about these gifts. Sara had sent a letter to the ED on January 14, 2022, in which she had told that she kept refusing to give gifts to Sukesh, but she did not agree. Defeated, Sara asked Sukesh to send a box of chocolates, and he also sent Frank Muller’s watch to Sara. The cost of this watch in India is lakhs.

Jhanvi Kapoor
Bollywood actress Jhanvi Kapoor has also been targeted by Sukesh through their wife Leena Maria Paul. Sukesh’s wife gave the full Rs 18 lakh to Jhanvi. This is the same money that Sukesh has grabbed from the wife of a Delhi businessman who is in jail. Lena Maria Paul approached Jhanvi by becoming the owner of the salon (Nail Artistry). On July 19, 2021, he invited Janhvi to open a salon in Bangalore.

Without knowing Sukesh and Leena, Jhanvi moved to Bangalore to integrate her salon. Leena had paid a professional fee of Rs 18.94 lakh to Jhanvi, which was directly deposited in the actress’s account. Jhanvi told the ED that apart from this money, Leena’s mother had gifted her a Christian Dior tote bag during the event. Jhanvi has given her bank account details and her statement to the ED.

Read More: Janhvi Kapoor looks radiant in a floral swimsuit as she dips into the pool – In Pics

Bhumi Pednekar
Sukesh Chandrashekhar has also targeted Bhumi Pednekar. Pinky reaches near Irani land. Pinky introduces herself to Bhumi as the HR of Nude Express Post. This is January 2021. Pinky tells Bhumi that her company’s group chairman Sukesh Chandrashekhar is her big fan. He wants to talk to her about a very big project. Also Sukesh wants to gift them a car too.

The very next day Sukesh Chandrashekhar contacted Bhumi and introduced himself as Shekhar. Shekhar aka Sukesh said that his friend Miss Irani must have asked him to gift the project and the car. In May 2021, Pinky Irani messaged Bhumi and wrote that Sukesh is a billionaire and wants to gift her a car as she likes to gift to her friends. The same day Sukesh also contacted Bhumi and introduced himself as Suraj of NE Group. Bhumi tells the ED that she has not received any gift from Sukesh Chandrashekhar alias Suraj alias Shekhar.

Some time back, the ED investigation report revealed that Sukesh had gifted a BMW car to Canadian-born dancer and Bollywood actress Nora Fatehi. At the same time, he gave a gift of about Rs 10 crore to Sri Lanka-born actress Jacqueline Fernandez. Pinky Irani approaches Jacqueline’s makeup artist Shaan. With his help, she reaches out to the actress and introduces Sukesh. Sucks gifted Jacqueline expensive bags, shoes, watches, accessories, horse harnesses and sandals. Apart from this, Jacqueline and Sukesh had a fight on the occasion of Valentine’s Day, for which Sukesh gave Rs 10 crore to Pinky and they resolved the differences between the two.

Share
Facebook
Twitter
Pinterest
WhatsApp
Linkedin
Telegram
Previous articleRussia-Ukraine Conflict: Which country stands with whom in the Ukraine-Russia crisis?
Next articleToday’s Horoscope 24 February 2022: People of Scorpio zodiac will get progress in the field of education, know the condition of other zodiac signs

Neha Malik Photo: Bhojpuri actress Neha Malik is constantly criticized for her appearance. The actress has made a name for herself in the Bhojpuri...
Read more