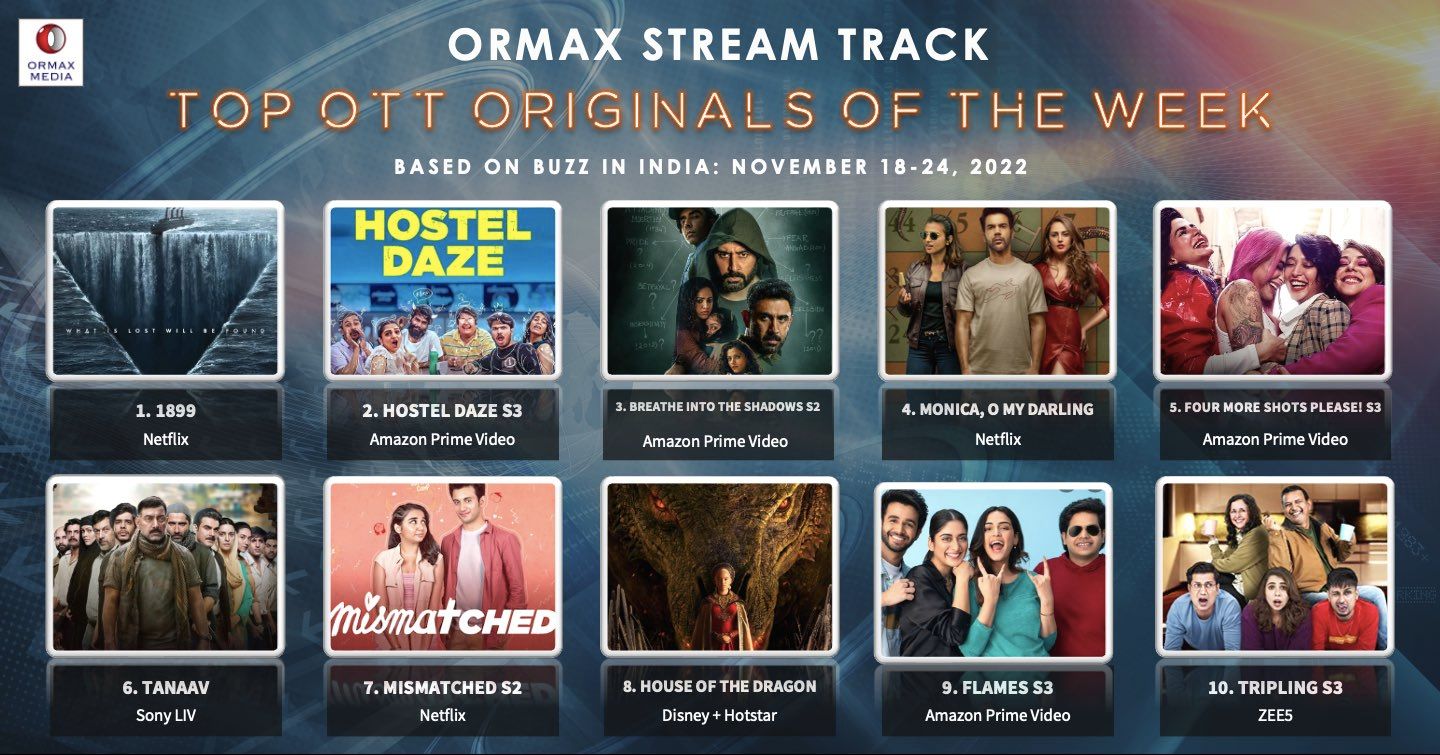 Due to the great response to the movies and web series released on OTT, Ormax Media has released a list of the top 10 movies and series. This list is based on the data from November 18-24. If you have missed any movie or series in this list, then you must watch them once because this original content is well-liked by the audience. Let us give you information about the streaming platform along with the name of the Movies and Web Series included in this list.

If you like ghostly content then you must watch this series. This horror web series has been released on Netflix on 17 November. Let us tell you that the web series is based on a group of European immigrants. At the same time, this series is full of adventure and thriller.

After two successful seasons, the third season of Hostel Daze has also been released on Prime Video this month. The third season of the series depicts the characters Ankit, Akansha, Jhantu, Chilrag, Nabomita and Jatt in their third year of college, where their rollercoaster ride and strange experiences are shown. In such a situation, the audience can also like its third part very much.

Breathe Into The Shadows S2

The new season of ‘Breathe into the Shadows’ unveils the mystery or to say that this time the shadow is even more dark than it would not be wrong. Like the first season, this time too Abhishek and Amit’s charm is seen. At the same time, Naveen Kasturia, who became famous with many TVF series, is also playing an important role in this web series. The series can be viewed on Prime Video.

If you are a fan of Rajkummar Rao then you must watch his latest film Monica O My Darling. This film can be streamed on Netflix. It also stars Bollywood actresses, Huma Qureshi and Radhika Apte.

The third season of the series’ Four More Shots Please’ is also being well received by the audience. This series can be seen on Prime Video. It once again gives an interesting glimpse into the lives of four friends – Anjana Menon (Kirti Kulhari), Damini Roy (Sayani Gupta), Siddhi Patel (Maanvi Gagroo) and Umang Singh (Bani J).

This series can be streamed on Sony Live. If you also like to watch content based on Kashmir issues then you will like Stress. At the same time, actor Arbaaz Khan has appeared in this series after a long time. Along with this, Manav Vij and Rajat Kapoor are also present in the series.

The series showcases love, friendship, jealousy, rivalry, tension and a lot more. The series can be viewed on Netflix. Prajakta Koli, Rohit Saraf and Rannvijay Singh are in important roles in the web series.

House Of The Dragon

Along with the English-speaking audience, there are many Hindi-speaking viewers as well, who loved the first season of Disney Plus Hotstar’s popular show ‘House of the Dragon’. If you are getting bored then you can entertain yourself by watching this. Talking about the cast of House of the Dragon, it includes established actors like Paddy Considine, Matt Smith, Emma D’Arcy and Rhys Ifans among others.

Tripling Season 3 can be streamed on Zee5. At the same time, Sumit Vyas, who is playing the lead role of the show this time, has written the script and dialogues of the show. Apart from this, the show has been directed by Neeraj Udhwani. Whereas, TVF fame Arunabha has produced the show.

Share
Facebook
Twitter
Pinterest
WhatsApp
Linkedin
Telegram
Previous articleRenault is going to do big bang, 7 seater SUV will come to compete with Safari and XUV
Next articleRajasthan Free Mobile Yojana 2022: Gehlot government is going to give free phones to women.