Mumbai: A huge crowd at the centers amid the shortage of vaccine, a large number of elderly people coming to get vaccinated 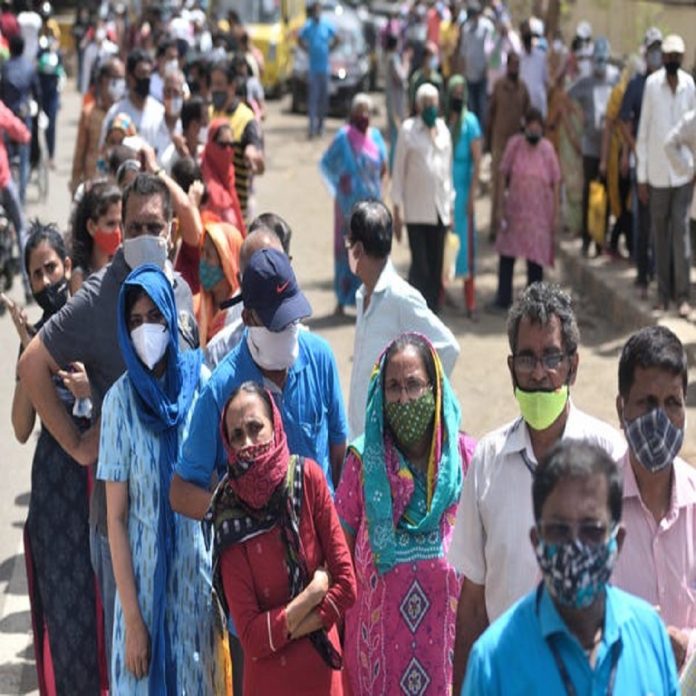 Vaccination work is also going on in the country amid the growing crisis of Corona. On Thursday morning, there was a huge crowd of people at the BKC Vaccination Center in Mumbai. This is the largest vaccination center in Mumbai, people are coming here to get vaccines in large numbers. However, there is still a shortage of vaccines at the center.

Around nine in the morning, the vaccination center told the people that they have only 5000 doses, in which case those who are elderly will be given priority. An elderly person standing in the line said that social distancing is not being followed here, but everyone wants to get the vaccine.

At the same time, a person says that he wants to get the vaccine right now because there is no idea of ​​what kind of conditions are formed later.

Let us tell you that the list of vaccination centers was released last night by BMC. A total of 66 vaccination centers of BMC are functioning today, along with nine private centers that are also being vaccinated. However, many centers will be operational only after 12 o’clock.

BMC appealed to the people not to come out of the house in large numbers, otherwise, there may be congestion. This is the condition of many centers, not just one center in Mumbai. Hundreds of people have reached outside many centers.

Let us tell you that Maharashtra Health Minister Rajesh Tope has already said that there is a shortage of vaccines in the state, in such a situation, many centers are getting vaccinated for some time. The minister says that he has no control over the availability of the vaccine.

This is not the first time in Mumbai when a vaccination center is struggling with a vaccine shortage. Vaccination has been canceled not only in Mumbai but also in other cities of Maharashtra due to lack of vaccine.

Actually, vaccination is starting for people over 18 years from May 1. However, it will not start in Maharashtra yet. But registration has started on the Kovin app, in such a situation that the number of vaccine users has increased, the crowd has started increasing in the centers.

Share
Facebook
Twitter
Pinterest
WhatsApp
Linkedin
Telegram
Previous articleAxis Bank has increased the average balance threshold, as well as cash withdrawal and other fees.
Next articleHow much money does Google save each year by allowing workers to work from home?