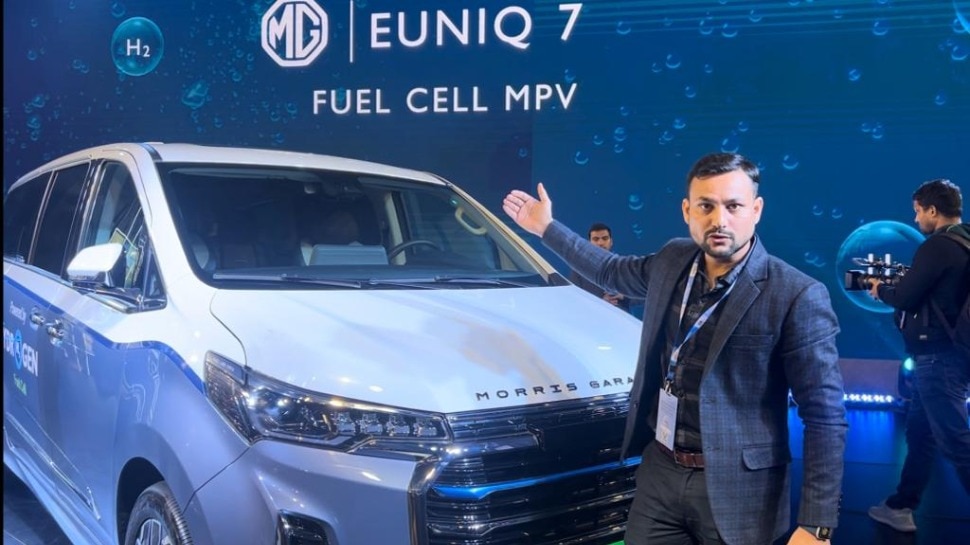 MG Hydrogen Car: MG Motor India has introduced a special car Euniq 7 MPV at Auto Expo 2023. This is the company’s first Hydrogen Fuel Cell Car (FCEV). Euniq 7 is sold in foreign markets under the name Maxus Mafi. This is a type of electric car, the specialty of which is that it does not have to be charged. The hydrogen tank given in it can be filled in just 3-5 minutes, after which you can travel up to 600km.

MG Euniq 7 has been given a special MPV design. It gets a big grille and big headlamps. This MPV has been given a very boxy design. It has a large glasshouse and sliding doors. Seven people can sit in the MPV. It has captain seats in the second row. Features include a digital touchscreen, panoramic sunroof, digital instrument cluster, and ADAS features.

The company has not given much information about the powertrain of Euniq 7. But considering the foreign market, the electric motor of MG Euniq 7 is going to give a power output of 201bhp. It has a 6.4 kg hydrogen cylinder. The hydrogen present in this cylinder reacts with oxygen to drive the electric motor. Filling up with hydrogen takes a few minutes, which means less time than petrol or diesel vehicles.

MG has now become the third company to introduce a hydrogen car in the Indian market. Earlier, Hyundai and Toyota also launched their hydrogen cars.

Read More: In Auto, Expo Veer was spotted, the Indian Army is testing this vehicle

Share
Facebook
Twitter
Pinterest
WhatsApp
Linkedin
Telegram
Previous articleThis electric scooter will stand without a stand! Desi company did amazing, will get a 100km range
Next articleThis scheme of 200 rupees will provide a monthly pension of 50 thousand, invest in this government scheme today itself