Adi Shankaracharya had built 13 akhadas in the eighth century, know everything about their tradition and history 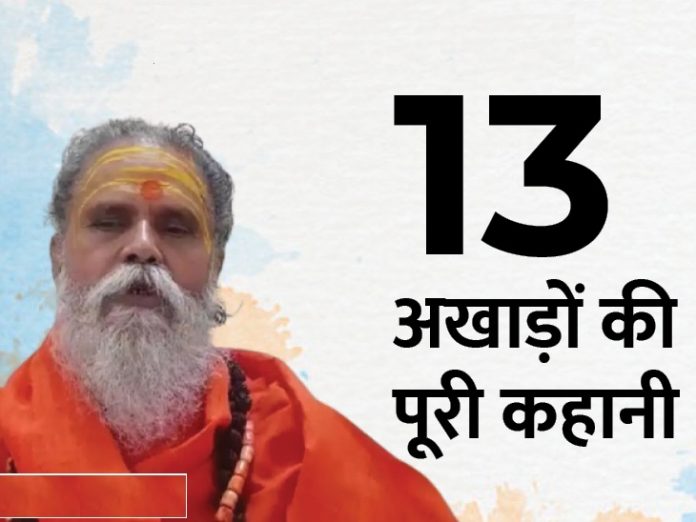 Mahant Narendra Giri, president of Akhil Bharatiya Akhara Parishad and secretary of Niranjani Akhara, died on Monday. His body was found hanging in his Baghambri Math in Prayagraj. There are different theories about his death.

The most talked-about is his disciple Anand Giri, who has been arrested by the police. The reason for this is the 300-year-old will of the Baghambari throne, which was handled by Narendra Giri. A few years ago, Anand Giri accused Narendra Giri of selling 8 bighas of Gaddi’s land for 40 crores, after which the controversy deepened. Anand had also accused Narendra of getting the secretary of the arena to be murdered.

After all, what are these forts? What is their tradition and history? How are they entered? Let’s know…

When and how were the akhadas formed?

Adi Shankaracharya is said to have built 13 akhadas in the eighth century. These akhadas were formed to protect Hinduism and Vedic culture. At that time the Vedic culture and the Yagya tradition were in crisis, as Buddhism was spreading rapidly in India and Buddhism prohibited Yagya and Vedic traditions. Originally the akhadas were prepared on the lines of an army of Naga sadhus to protect the religion. In which they are taught yoga, spirituality as well as weapons. To this day the same akhadas remain. Except for the Nashik Kumbh, all the Akharas bathe together in the rest of the Kumbh Melas. In the Kumbh of Nasik, Vaishnava Akharas take bath in Nasik and Shaiva Akharas take bath in Trimbakeshwar. This system was established during the period of Peshwa which is going on since 1772.

Akharas have their own arrangements, but Adi Shankaracharya has arranged these 10 Akharas (Shaiva and indifferent) under four Shankaracharya Peeths. These akhadas are headed by Shankaracharyas. Committee elections are held for the arrangement of the akhadas, but the post of the arena chief is different, which leads the akhadas. Acharya Mahamandaleshwar’s post is the biggest among 10 Shaiva akhadas, he is the chief teacher of the akhada, under whose guidance the akhada works, the entry of saints of the mahant and Mahamandaleshwar level into the arena is done with their permission and they are considered to be their acharyas. go.

At the same time, the post of Ani Mahant is the largest in Vaishnava akhadas. In this, the post of Shrimahant is equivalent to the posts like Mahamandaleshwar. The Acharya of all these Shri Mahants is called Ani Mahant, who runs the Akhara.

Which are these 13 akhadas?

Royal rides, elephant-horse decorations, bell-sounds, feats of Naga-akharas and open display of sword and gun are the hallmarks of this akhadas. This is that group of sadhus who are proficient in weaponry. According to the saints associated with the akhadas, the akhadas were born to convince those who do not believe in the scriptures. These Akharas have also played an important role in the freedom struggle. After independence, these Akharas had given up their military character. Initially there were only 4 main Akharas, but due to ideological differences, they got divided.

How did these akhadas get the name akhada?

Arena, although a word related to wrestling, but wherever there is scope for betting, it is also used there. Earlier, the akhadas of the ashrams were called baida, that is, a group of sadhus. Earlier the word akhada was not in use. There were pirs in the group of sadhus. The use of the word Akhara started from the Mughal period. However, according to some texts, the word ‘Akhada’ has originated from the word Alakh itself. Whereas, according to some religious experts, it has been given the name of Akhara due to the arrogant nature of the sadhus.

How do these arenas work?

All the akhadas involved in the Kumbh are governed by their own rules and regulations. The Akhara Parishad punishes the sadhus who commit crimes here. A sadhu guilty of a minor mistake is sent to take five to 108 dips in the Ganges along with the Kotwal of the Akhara. After the dip, he comes to the Devasthan in a wet cloth and apologizes for his mistake. Then the priest acquits him by giving prasad kept at the place of worship. In cases like marriage, murder or rape, he is expelled from the arena. Only after leaving the arena, the law mentioned in the Indian Constitution applies to them.

If two members of the akhara fight among themselves, a Naga sadhu marries or is guilty of rape, if caught stealing someone’s belongings from inside the cantonment, defiles the shrine or enters a forbidden place, a sadhu is a traveller. Behave indecently with the host, if someone ineligible climbs on the stage of the arena, then the court of the arena punishes him. The oath to obey the law of the Akharas is administered during the process of becoming a Naga. The member of the Akhara who does not follow this law is also expelled.

How is the entry of sadhus done in the arena?

The entry of sadhus in the akhadas is not easy. In the Shaivite tradition, one has to give a lot of time to the akhara to become a Naga Sadhu. Akhadas have their own separate system for this. No one is given initiation as soon as they enter the arena. If someone wants to become a monk, then he has to give his services by keeping him in the arena for some time. Staying with the sadhus and serving them and during this time one has to choose his guru. The service time can range from 6 months to even 6 years. During this, Akhara investigates the history and family background of the person, to find out about his character. Then, he is initiated at some Kumbh Mela. For this one has to give up his worldly life, one has to do Pind Daan of himself. After the initiation process of about 36 to 48 hours, he is given entry in the arena with a new name.

Are there elections in the Akharas?

According to the sages and saints of the Akhara, the Akhara runs only through democracy. Elections are held in Juna Akhara every six years. The committee is changed. Every time we choose a new one, so that everyone gets a chance to lead. All the saints also had good leadership abilities. In some akhadas, there is a proper election process, voting is also done when needed. Those who do good work are re-elected, if they don’t, they are replaced. There are some akhadas where elections are not held. Similarly, in the Akhara Parishad, a committee of 16 people, including the president, vice-president, secretary, is elected, it is called the cabinet. The Committee (Cabinet) meets from time to time. There is also a provision for an emergency meeting. Whenever Dharmadhwaj is established in Simhastha or Kumbh, the committee is automatically dissolved. All the rights come to the two heads, who together manage the whole Simhastha or Kumbh. After Kumbh-Simhastha, the committee comes back into existence.

Elections are held in these akhadas

Juna Akhara: Elections in 3 and 6 years. In 3 years, the executive committee of the sadhus associated with justice. President, Minister, Treasurer in 6 years.

Panchayati big indifferent Akhara: No Panch system. There are four mahants, who live for life, do not retire.

Panchayati indifferent new Akhara: Once built, it lives for life.

Panchayati Nirmal Akhara: Elections are not held, they choose permanent ones.

Panch Digambar Ani Akhara: No election. choose once. They remove the punch when there is inability, opposition.

Pancha Ramanandi Nirvani Ani Akhada: Once elected for life or till he becomes incapacitated.