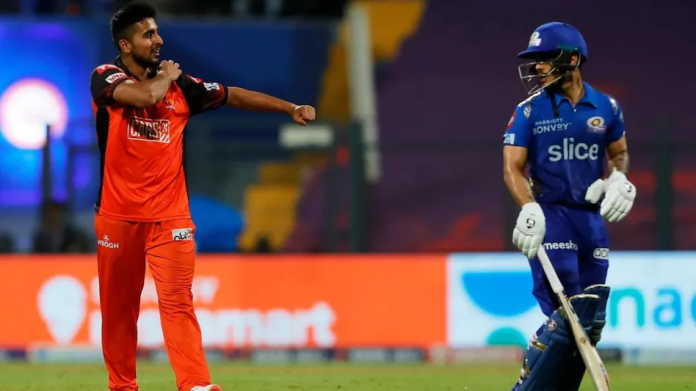 Mumbai Indians have another defeat in the Indian Premier League 2022. Sunrisers Hyderabad won by 3 runs in a thrilling match. With this, the hope of reaching the playoffs of Hyderabad is alive.

A very exciting match was played in the Indian Premier League (IPL) on Tuesday. Sunrisers Hyderabad (SRH) beat Mumbai Indians (MI) by 3 runs in a high-scoring game. Tim David of Mumbai Indians finally tried to change the course of the match by playing a stormy inning, but he could not finish the match.

Sunrisers Hyderabad won in the end and kept their playoff chances alive. Batting first in the match, Hyderabad scored 193, and Mumbai Indians came very close but could not win. Mumbai’s innings halted at 190 and lost the match by 3 runs.

Now, what is the math of the playoffs? (IPL playoff count)

So far only the team Gujarat Titans has been able to officially qualify for the playoffs, for the remaining three places, there is a competition between several teams. The team of Rajasthan Royals and Lucknow Super Giants are at number two-third with 16-16 points and both of them are absolutely certain to reach the playoffs. In such a situation, there is such a place left that is claimed by many teams. Right now at number four is Delhi Capitals, who have to play their next match against Mumbai Indians. 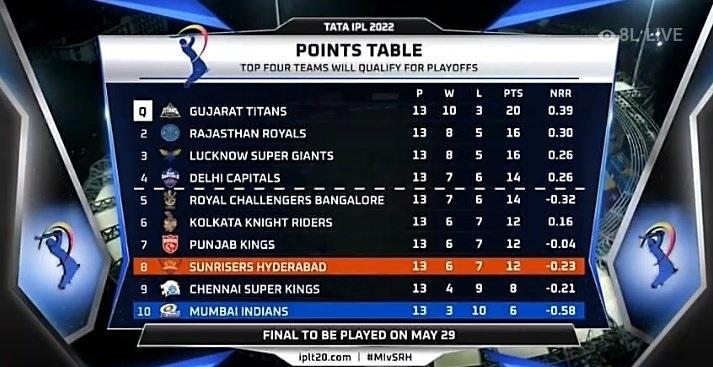 Mumbai Indians Mumbai Indians got the best start of this season. Captain Rohit Sharma was seen in full color and his confidence was visible in every single shot. Rohit Sharma scored 48 runs even though he missed the half-century but he won the hearts of the fans by hitting 4 sixes. Apart from Rohit, Ishan Kishan also played an innings of 43 runs.

Tim David finally gave real hope for Mumbai. He scored 46 runs in just 18 balls, which included 4 sixes. Tim David scored 26 runs in the same over of T. Natarajan. But he also lost his wicket in the same over. Mumbai Indians needed 19 runs to win in the last over, but the team could manage only 15 runs.

Rahul Tripathi played an innings of 76 runs, which included 9 fours-3 sixes. Nicholas Pooran also scored 38 runs with the help of 2 fours, 3 sixes. Captain Kane Williamson, who was struggling with poor form, dropped himself to number five this time, so it was the right decision on his part. Sunrisers Hyderabad scored 193 runs in this match.

Indian Team: The sword hanging on the career of Rishabh Pant! This strong wicket-keeper batsman came back in Team India

Now people will get cheap treatment across the country, the government has taken this big decision

By the end of this year, the Employees State Insurance Corporation (ESIC) will be deployed across the country. Along with this, hospitals will be...
Read more