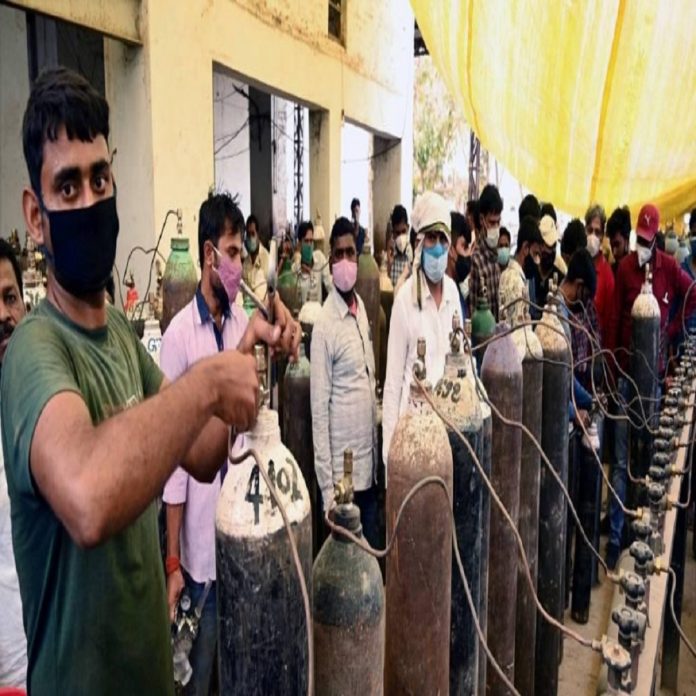 In Delhi, where people come from different parts of the country to get treatment, today people themselves are yearning for treatment. Thousands of cases are coming to the city every day in Delhi, which is suffering from the great outbreak of Corona, but at the moment the biggest crisis is that of oxygen. In many hospitals in Delhi, oxygen is either on the verge of being exhausted, or there are only a few hours of stock left. The situation is similar to Delhi in Lucknow, where people have to wait for hours for oxygen.

The situation in Delhi has become such that the Max Hospital had to approach the High Court to demand oxygen supply, after which the court has given a strong rebuke to the Central Government and directed the oxygen supply.

There is a shortage of oxygen in different areas of Delhi. A picture surfaced on Thursday morning, where a long queue of people is seen outside a gas agency in Shahdara. Here people have been standing for filling oxygen cylinders for many hours.

Oxygen ran out in Delhi’s Mata Chanan Devi Hospital on Thursday morning. There are more than 200 patients here who need oxygen. Contact is being made with the company supplying oxygen continuously on behalf of the hospital.

Rage on oxygen in Delhi and Haryana … There was already a shortage of oxygen in many hospitals like Max, Fortis, Apollo, Sir Gangaram in the capital. Meanwhile, there was a significant impact on the supply coming to Delhi. Many hospitals alleged that the Haryana government had stopped the supply of oxygen to the hospitals in Delhi. Delhi’s Deputy Chief Minister Manish Sisodia had also made serious allegations against the Haryana government, but Haryana denied these allegations.

After the crisis, the Center increased the quota of

Delhi in many hospitals of Delhi, when the crisis of oxygen arose, the Central Government made changes in the quota of Delhi. According to the quota of the Center, earlier Delhi used to get 378 MT of oxygen, which has now been increased to 480 MT. Delhi Chief Minister Arvind Kejriwal also thanked the central government.

The situation in Lucknow is bad, now the supply is reaching,

just like Delhi, the capital of the country, there is also a crisis of oxygen in Lucknow. The situation is that due to lack of oxygen in TS Mishra Hospital of Lucknow, some patients admitted to ICU had to shift to KGMU hospital. There were about 13 patients who were shifted.

At Mayo Hospital in Lucknow, there was a stir on Wednesday due to a lack of oxygen. There were about 120 patients admitted, the hospital needed 400 oxygen cylinders. The hospital first passed the notice at its gate, after which the crisis increased but only after some time oxygen came and the notice was removed.

In Uttar Pradesh, oxygen is being sourced from Bokaro to meet the demand for oxygen. The oxygen cylinders will reach Lucknow from Bokaro via train. Chief Minister Yogi Adityanath has directed that the supply of oxygen should be completed as soon as possible by increasing the number of tanks. Oxygen was also transported from Moradabad to Lucknow in police security the previous evening.

Apart from Delhi and Uttar Pradesh, Madhya Pradesh is also facing an oxygen crisis, on which the state government sought help from the central government. According to Union Railway Minister Piyush Goyal, in view of the demand for oxygen from Madhya Pradesh, there will also be run Oxygen Express from Bokaro, and more such trains will be started in a few days.