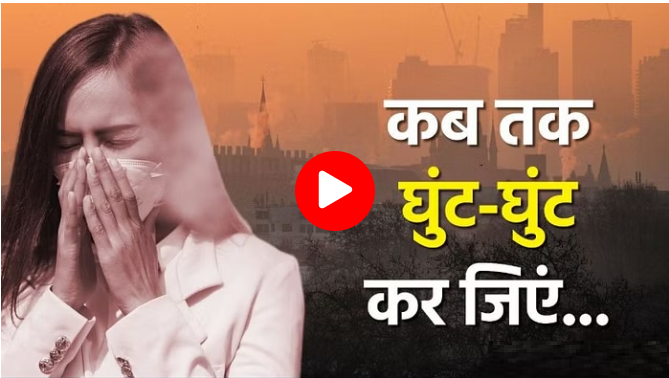 Due to favorable weather on Sunday, a slight improvement in the pollution level was also recorded. In the late evening of Saturday, the wind moved at a moderate speed from the southwest, northwest direction. On Sunday, the wind direction changed to the northwest direction, and there was some improvement in the pollution level with a wind speed of eight km, but there was no special relief from the dense fog in the morning and cold wave-like situation. Location. A dense blanket of fog has enveloped Delhi-NCR.

According to the Central Pollution Control Board, the pollution index in Delhi dropped six points to 377 on Sunday. Except for Greater Noida (402) of NCR, the index of Bahadurgarh, Ballabhgarh, Faridabad, Ghaziabad, Noida, and Gurugram remained low.

Apart from Delhi, the pollution level of Noida, Gurugram, Ghaziabad remained in the very poor category on Sunday. It is estimated that Delhi’s pollution level may remain in the very poor category for the next six days. Dense fog may occur in the morning on Monday, while cold day conditions will continue in some areas. The situation is likely to remain the same on Tuesday as well.

According to the Indian Institute of Tropical Meteorology (IITM), pollution levels have declined due to favorable weather conditions. On Sunday, the wind blew at a speed of eight km from the northwest direction in Delhi. There is a possibility of dense corona on Monday morning.

At the same time, the wind direction may change to northwest at a speed of eight km per hour, due to which the cold will increase further, due to which the pollution level is expected to increase. On the other hand, due to low temperature, the mixing height remained only 650 meters on Sunday. The ventilation index was also below average.

Share
Facebook
Twitter
Pinterest
WhatsApp
Linkedin
Telegram
Previous articleBudget 2023: Standard deduction limit can be increased to Rs 70000, Finance Minister can give this relief!
Next articleNaagin got boldness fever! There was such a cut in the dress near the breast that the fans were stunned

The first meeting of the newly elected MCD will be held on January 6, LG approves the proposal

The first meeting of the newly elected Municipal Corporation of Delhi will be held on January 6. Lieutenant Governor VK Saxena approved the proposal...
Read more

Noida builders will not be able to keep paying guests in society flats. For this AOA and RWA have issued circular. Due to this...
Read more

Owners of BS-III petrol and BS-IV diesel four-wheelers will now be able to take their vehicles on Delhi roads as the restrictions imposed on...
Read more