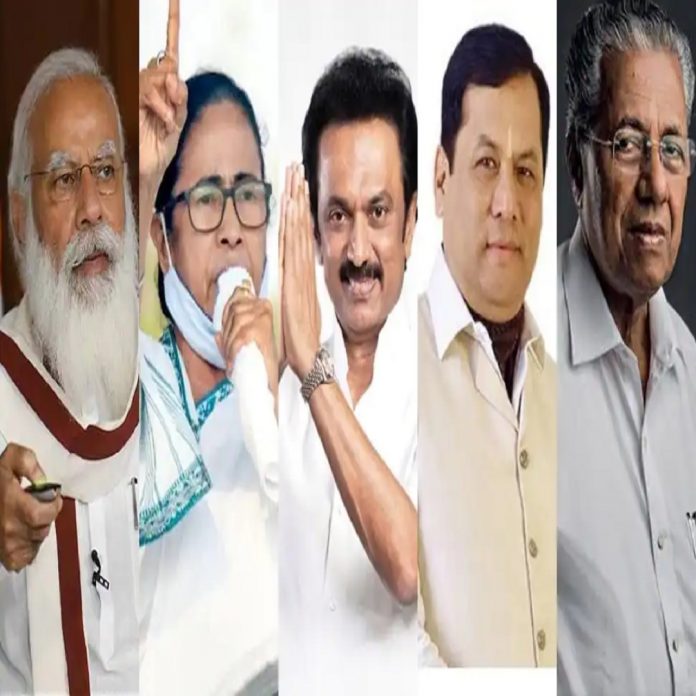 The official results for the high-stakes Assembly election held in four states and one Union Territory are almost out now for the majority of the constituencies and barring West Bengal, the predictions of exit polls remained more or less close to the actual results and trends in Assam, Tamil Nadu, Kerala, and Puducherry.

As per the available trends and results on the Election Commission of India’s website on Monday (May 3, 2021) morning, the Mamata Banerjee-led Trinamool Congress (TMC) has retained power in West Bengal for the third consecutive time, whereas, the Left Democratic Front (LDF) headed by Pinarayi Vijayan has made the first re-election in 44 years. In Tamil Nadu, MK Stalin’s Dravida Munnetra Kazhagam (DMK) has dethroned incumbent Edappadi K Palaniswami’s All India Anna Dravida Munnetra Kazhagam (AIADMK), while the Bharatiya Janata Party-led alliances (BJP) have won in Assam and Puducherry.

The battleground of West Bengal was considered to be the most important one and as the exit polls suggested, people were expecting a close fight between the ruling Trinamool Congress and the Bharatiya Janata Party. However, Mamata Banerjee’s ‘Khela Hobe’ in the West Bengal Assembly election 2021 showed why she is one of the indomitable fighters. According to the available trends and results, the Trinamool Congress won way more seats than the halfway mark. They have so far won 209 seats and are leading in 4, out of the 292 assembly constituencies. The Bharatiya Janata Party which did intense campaigning considering its overwhelming result in the 2019 Lok Sabha polls, was restricted to double-digit. The saffron party won 76 seats and is leading in one.

Pinarayi Vijayan’s Left Democratic Front has scripted history by winning the Kerala Assembly election 2021. The LDF broke Kerala’s record of voting out every incumbent government for the past four decades and made the first re-election in over 44 years.

Congress, a DMK ally, also won 15 and is currently leading in 3 seats. DMK’s other allies CPI and CPI (M) have won two seats each, while the Viduthalai Chiruthaigal Katchi (VCK) has won four seats.

Lotus blooms in Assam and Puducherry

On the other hand, in Puducherry, the NR Congress, BJP, and AIADMK alliance emerged victorious in the 30-seat assembly. The All India NR Congress secured 10 seats, while the BJP won six. Congress managed to get two seats, while DMK secured six seats and the independent candidates bagged six seats.

Share
Facebook
Twitter
Pinterest
WhatsApp
Linkedin
Previous articleTo pay with Google Pay, simply tap the phone. In the not-too-distant future, NFC technology will become a reality.
Next articleCovaxin or Covishield? If you are confused in your mind then this is the answer of the specialists

Aadhaar Cards: PVC Aadhaar from the open market is not valid as UIDAI new guidelines; steps to follow to get a valid card

LPG Subsidy is coming in your record or not? Check this route in minutes sitting at home

LPG Subsidy comes in your record or not? In the event that you don't have the foggiest idea about this at this point, know...
Read more